Laying anchor in the GTA 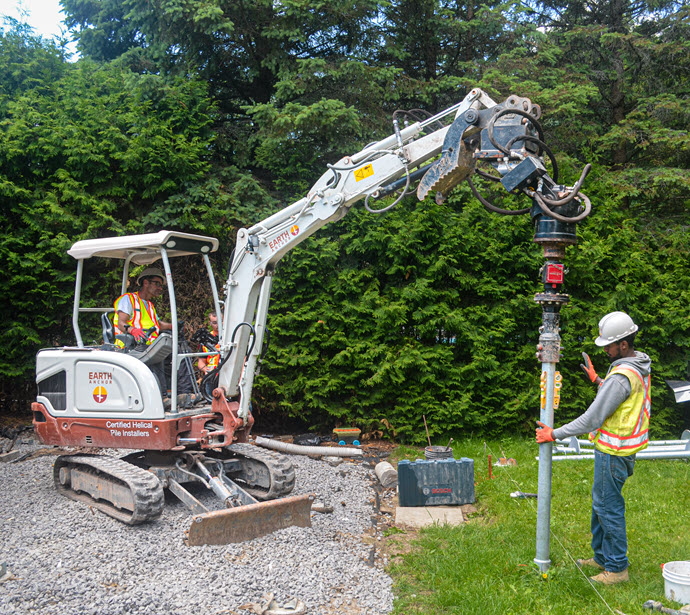 A construction company that started two years ago is building a name for itself as the go-to for a niche demand in the Greater Toronto Area and Ontario's cottage country.

"We both have previous foundation experience, and as we were growing our other foundation-related company, builders were pushing us to get into the helical pile business, as they thought we would be a good fit for developing a company that specializes in this kind of work," Garfield explains. "Helical piles are a deep foundation system you use when you encounter bad ground conditions or need to achieve high loads - there are lots of different applications for them."

Since a great deal of the work is done on properties within the GTA with tight footprints – especially in downtown Toronto – getting the right compact equipment to tackle these projects was vital for the company's success.

When Earth Anchor was founded, Garfield wanted the company to operate a fleet of equipment from a single manufacturer since in a previous company that Garfield ran, he relied on multiple manufacturers for his fleet, which was far from ideal.

"It was frustrating going to three companies for service, and the service was horrible. So, I wanted to find a company that I knew could service me and had a good warranty," says Garfield.

After reviewing the various options available, Earth Anchor selected Takeuchi compact equipment. Garfield was happy to purchase Takeuchi equipment, as he knew of the company's reputation for building dependable equipment in Europe and Japan.

"We wanted to find the most reliable machines with the best service and that had the smallest footprint. Takeuchi offers a line of everything compact," he says.

When looking at other manufacturers' compact options, Garfield says many options were two inches wider than the Takeuchi options.

"Every inch matters to us, especially working in downtown Toronto – 34 inches to 36 inches is a big difference," he says.

"The TB225R is a great machine for us because it's the only two-and-a-half ton with retractable tracks. And it's got a massive tail swing, which allows us to have a heavy drive on the front end. If you look at the machine, it's very long and very narrow. It's 43 inches wide and expands to 4 feet 9 inches. The blade is right in front of the machine, which acts as a stabilizer when you have an auger in front of you, and the tail is far back, giving you a good counterweight. It's a very stable machine. That's just one of the machines we use almost every day, and we're delighted with it," Garfield says.

The machine's all-welded frame is another key feature for Earth Anchor. "It's one frame, so the amount of pushing and pulling power is just phenomenal," Garfield says. 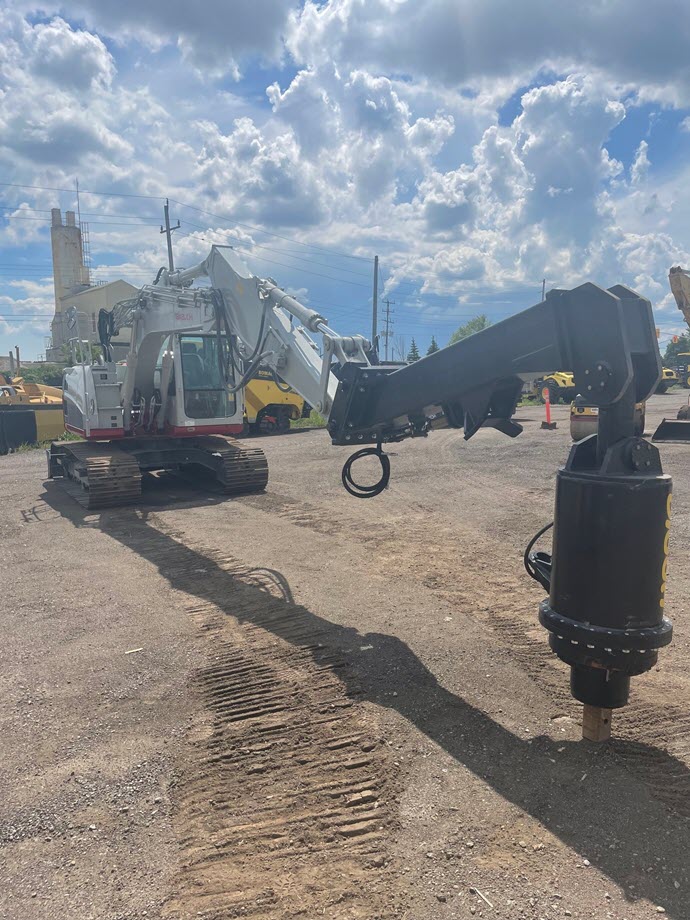 All of their compact excavators are equipped with Eskridge auger drives and have varying capacities for the types of helical piles they can install.

The excavators also have bucket attachments that are used to remove obstructions and a Rototilt to hold larger diameter piles in place. While those are the current attachments used on the compact excavators, Garfield says that he sees the company purchasing other attachments for additional applications.

The hydraulic flow and pumps installed on the Takeuchi compact excavators were another reason Earth Anchor opted for this equipment.

Earth Anchor's smallest excavator, the TB210R, has a unique feature that the company likes to utilize.

"The cool feature of the TB210R is that you can actually run hydraulic lines from the machine legally, and you can use the machine as a power pack, so we have a handheld auger, and we bring that little 210 to site, hook up some lines, and we connect it to the machine, and it runs our handheld auger," Garfield says. 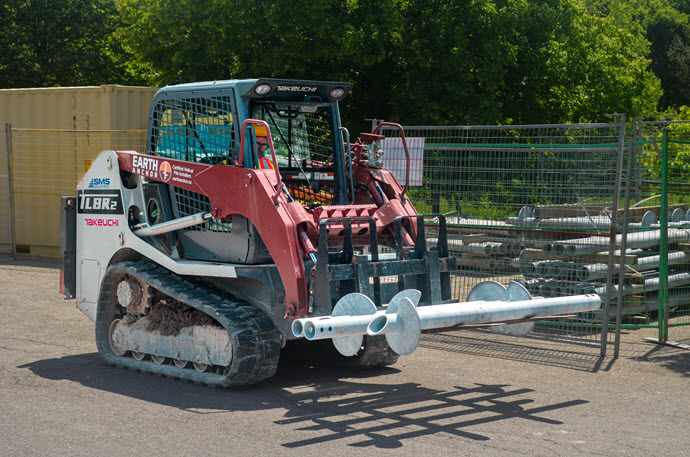 "We primarily use the track loader for loading and unloading material. But we also have a 30,000-ft.-lb. of torque auger head for the track loader. We use it in some drilling applications because they're fairly narrow, under six feet. It can get us into some tight spots. We also use it when we do some excavation work. We use it to move concrete and other materials down laneways," Garfield says.

SMS Equipment's reputation for reliable service was another factor in deciding to opt for building a fleet of Takeuchi equipment.

"SMS Equipment has been great with servicing us, especially with their warranty,” Garfield says.

He adds that SMS Equipment being a nationwide dealer is also extremely important.

"They can pull product from across Canada. When you deal with an independent dealer, you can only grab from what they have in stock. It's so much easier with SMS Equipment," Garfield says. 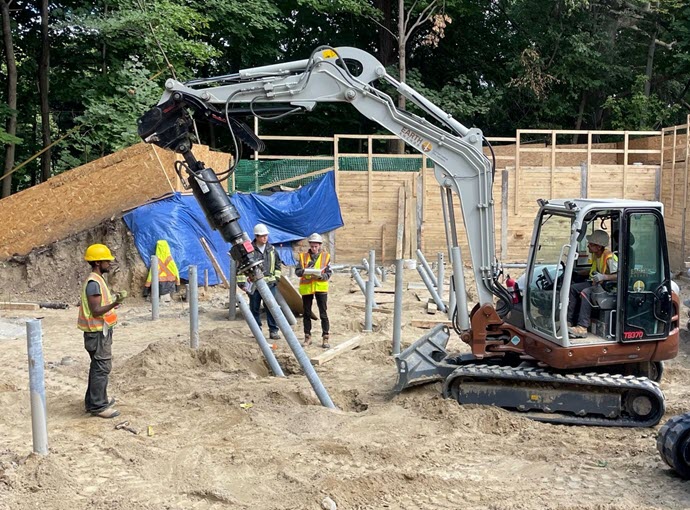 Earth Anchor has been very satisfied with the Takeuchi compact excavators' performance and doesn't expect that to change.

"First of all, they're reliable, so we know whether it's -20C or +30C, the likelihood of the machines starting is good. They've allowed us to get into places inaccessible to other machines. Because of the compactness and engine-hydraulic system capacity, they have allowed us to put on larger drill heads than you would typically see on these kinds of machines. And we've had minimal downtime. If there's an issue, which is rare, SMS Equipment comes and fixes it immediately," Garfield says.

Earth Anchor's slogan is "Finding good ground," and with its fleet of Takeuchi compact equipment, the company will definitely be able to achieve this for its customers.

"We've based our business on limited access work. So, if the job is horrible and tight, and you need high-capacity piles, and you need it engineered and carried out professionally, then that's really our go-to," Garfield says.

Speak to our team to learn more about Takeuchi and how it will meet the demands of your job site.

Speak to a Rep Today 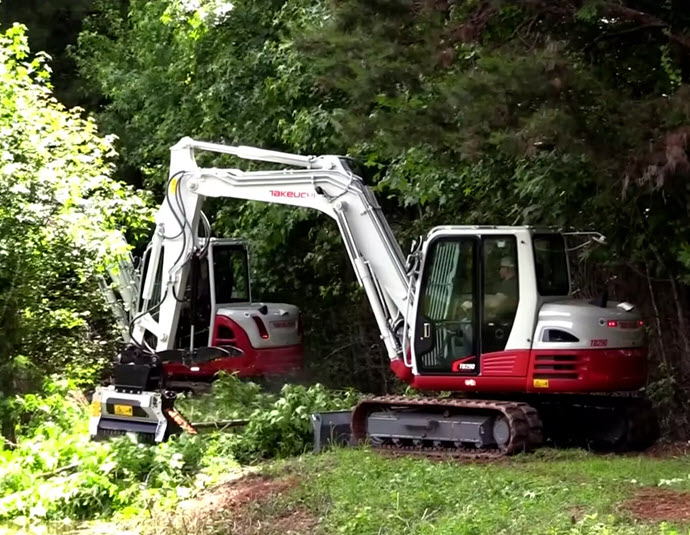 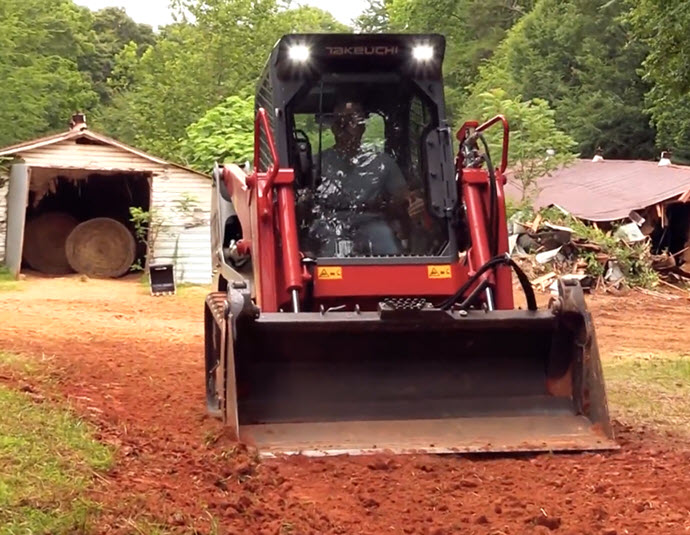