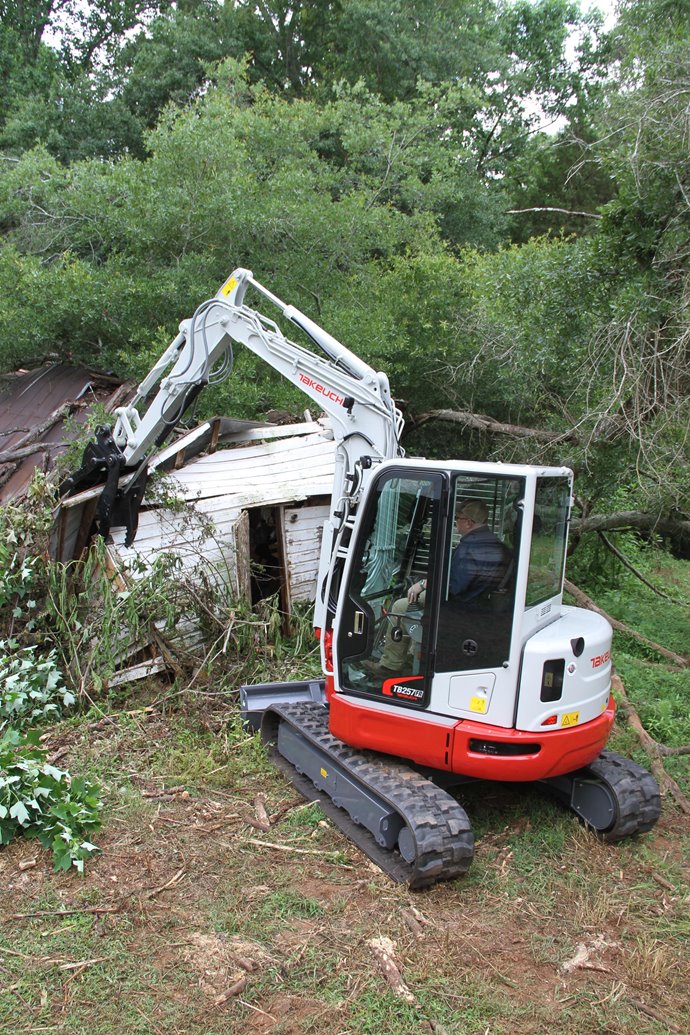 Choosing the right excavator for the task you are performing makes a significant difference in production and efficiency. A standard excavator is best for mass excavation, digging and loading on wide open job sites. They are not, however, a good fit for confined-space tasks. A tight-tail-swing such as Takeuchi’s new TB257FR should be used in such applications.

“The TB257FR’s low center of gravity and optimized counterweight placement creates an extremely stable platform with lifting capabilities similar to that of a conventional machine,” said David Caldwell, Excavator Product Manager for Takeuchi. “It features our unique side-to-side boom that fully offsets to the left or right while keeping the counterweight over the center of the machine for exceptional stability.”

Caldwell stated that applications such as road and bridge work, working alongside structures, general construction, landscaping and a “whole range of applications with limited access and space are ideal for the TB257FR.” He added that the offset boom feature coupled with the tight tail swing provides unmatched visibility to the work equipment and the task at hand. It also gives operators great confidence to dig or use a variety of attachments next to buildings or other obstructions because they are not worried about a counterweight swinging and hitting them.

Travis Bearpark, SMS Equipment Light Construction Sales Rep said this machine is “all about efficiency,” adding that it’s a good fit for any company that digs or performs other tasks in tight spaces. He added that most manufacturers have a boom knuckle swing, but Takeuchi’s FR models allow you to retract the arm in close against the side of the machine rather than out front which enables full rotation without any impediments.

“In every position, the tail has next to no overhang, giving operators great confidence during swing,” said Bearpark. “Being able to dig offset over the tracks without having to reposition the machine, not only saves time, but drives up efficiency immensely.”

For added stability, the undercarriage and frame include a heavy-duty backfill blade with float. The standard rubber tracks are approximately 400 millimeters (15.7 in) wide. Steel tracks are available. 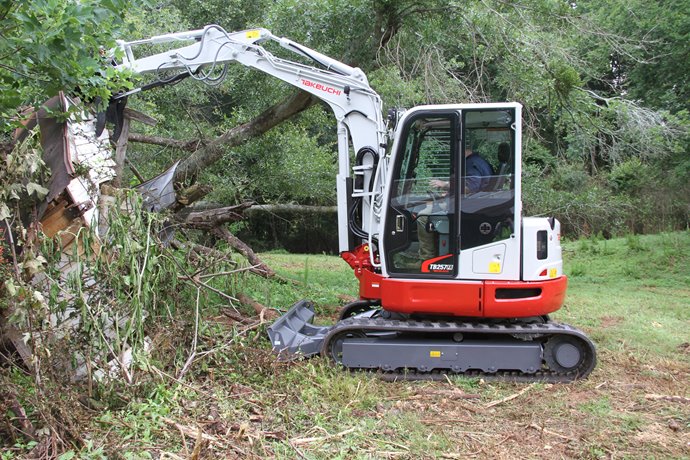 The TB257FR has plenty of power for all applications, according to Caldwell. The 39-kilowatt (52.3 hp) turbocharged engine provides 32% more output than its predecessor, the TB153FR. Features include automatic idle, automatic cold start device and an engine safe start system. Hydraulic performance improved with a 19% increase in traction force as well as hydraulic flow and main system pressure.

The excavator has multiple attachment presets, an integrated hydraulic quick coupler control system and a primary circuit flow selector valve. “Depending on the size of the attachment, the boom can be stowed alongside the cab,” said Caldwell. “In this position, the machine can stay nearly within the width of the tracks while the upper structure is rotated. This design often lets you work with a larger excavator in the footprint of smaller one.”
Bearkpark noted that the two standard high-flow circuits (primary and secondary auxiliary) with a third auxiliary line being plumbed from the factory for use with a hydraulic coupler are unique to Takeuchi and deliver greater versatility.

“As with other Takeuchi machines, owners and operators like that the excavators come factory ready to run a hydraulic coupler, pin grabber and their attachments,” said Bearpark. “They don’t have downtime waiting for the machine to be plumbed when it’s delivered. It allows them to be put right into production and run a wide range of attachments.” 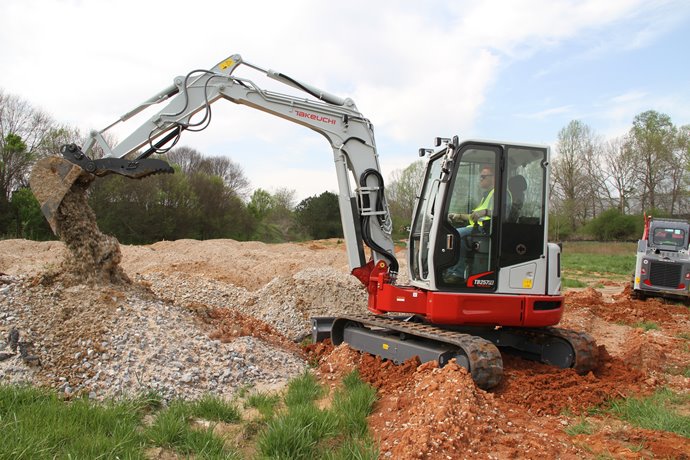 Caldwell said Takeuchi always keeps operator comfort in mind when designing its new products. He pointed out that the TB257FR shares the same spacious, well-appointed cab as the larger TB280FR.

“A big cab with bigger windows increases operator visibility, which in turn gives them excellent line of sight to the task they are performing,” added Bearpark. “That increases productivity and safety, as well as operator comfort because they are not constantly craning their neck to see what they are doing. When you are in the machine 8 to 10 hours per day, that makes a great deal of difference in fatigue. A comfortable operator is more productive.”
It includes a large multifunction monitor panel, electronic throttle control, rocker switches that control a wide range of functions, deluxe high-back suspension seat, adjustable arm rests and large floor area for greater legroom and comfort. Three working modes – ECO, Standard and High Altitude – allow operators to maintain optimum performance and efficiency.

“Maintenance and serviceability have been greatly improved with an enhanced forward tilting cab design that allows for much easier access to the hydraulic control valve, slew motor and swivel joint,” said Caldwell. “In addition, the counterweight has been redesigned to allow for easier access to the engine for daily maintenance checks and service.”